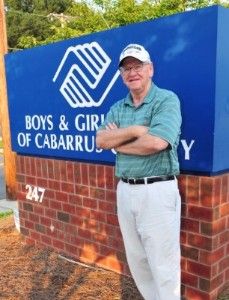 As his career was winding down, long-time Athletic Director Donnie Whittington often said that the Boys & Girls Club did a lot more for him than what he did for the Club.  Donnie's journey began with the countless number of hours he spent at the Club as a youth and continued with over 50 years of employment.  He became the prime example of what the founders wanted to accomplish with their new Club many years ago:  to make a life-long impact on the children of the community.

In 1946, Concord's W.M. Waterfield convinced community leaders that the city could benefit by the establishment of a Boys Club, like the one he observed in Little Rock, AK.  Over the next year, the Concord Community Boys Club was incorporated and leaders set up its first programs in the Concord Armory on Church Street until a new facility could be built.  In early December, 1949, under the leadership of Board President Dr. T.N. Spencer and Executive Director Donald Sams, the Boys Club's facility on Spring Street opened with 700 members.  Over 70 years later, with the help of a new facility constructed on the same property in 2002, the Boys & Girls Club of Cabarrus County, as it is now known, has a membership that approaches 2,000 boys and girls.

The Club has had many transformations over the years, and not just in facilities.  The Club has changed with the times, admitting its first African-American members in the late 1960s, and officially opening its doors to girls in 1982.  But the Club has always stayed true to its roots and its mission of providing recreational and educational programs in a safe, positive environment.  While some of its staff members have become institutions themselves in the community, the community has always been the Club's strongest link.  Providing guidance and financial support, community leaders have always viewed the Club as an investment in its future.  A quote from the program of the Club's official opening in 1949 says it best:  "It's better to make boys than to mend men".

The Club's new facility in 1949 was state of the art.  It had a gymnasium, a games room (which doubled as a meeting room for the Board of Directors), a library, and a "seniors room" for the teenage boys.  One of the Club's first regulars was a boy named Donnie Whittington, who would have to "sneak" in because he was too young for membership.  Donnie loved sports and remembers participating in other activities like arts and crafts and woodworking.  Around the same time the Spring Street facility was built, Dr. Spencer purchased a swimming hole in Rimertown that used to be known as Cress Lake and donated it to the Club for the use as a summer camp.  Soon after, boys were staying weeks at a time, loving the fishing, swimming, and canoeing, all for the affordable price of $1 a week.  Children like Donnie sometimes couldn't afford the cost so Camp Director C.C. "Bear" Little let them work their way through camp by washing dishes. 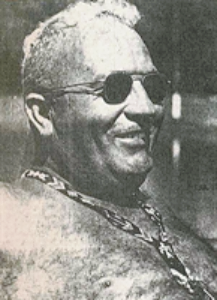 A former Club athletic director, Bear became the Executive Director in 1957.  Everybody loved Bear.  Possessing a personality that was as big as his hulking frame, Bear let the Club until the mid-1970s.  The sports programs, which included cheerleading for girls, grew under his direction and the leadership of new Athletic Director Donnie Whittington, who was hired in that capacity in 1957.  A second gym, which was uniquely carpeted, was constructed behind the existing structure in 1967.  One of Donnie's football and basketball coaches, Jim Helms, came to work at the Club in 1972.  Bear appointed Jim as Camp Spencer Director and put him in charge of the Club's games room.  Jim was Director when Camp Spencer added a swimming pool in 1976, replacing one of the lakes as the kids' favorite place to cool off.  Another famous Club moment occurred in 1976.  Jim and Donnie both remember the day when the Secret Service scoped out the Club because Presidential candidate Jimmy Carter was going to be in town that week for the Club's famous Pancake Day.  Other famous visitors to the Club over the years included cowboys Tex Ritter and Hopalong Cassidy, football coaches Lou Holtz and Bill Dooley, and NASCAR legend Ernie Irvan. 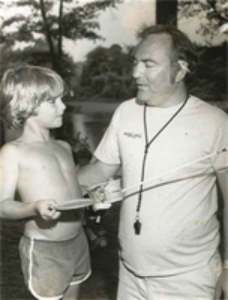 Originated by the Kiwanis Club in 1947, shortly after the Club's incarnation, Pancake Day is one of Concord's biggest social events of the year.  In the days when the Club did not have its own equipment, staff had to drive around town picking up tables, chairs, and grills that were stored in homes and businesses, forcing Club programs to take a week's hiatus.  Once the Club's largest fundraising event, Pancake Day still brings around 5,500 people into the building every third Thursday in March.  In terms of revenue, the Festival of Trees, which originated in 2005 is now the Club's biggest fundraiser.  The Club's other major fundraiser is the Boys & Girls Club Golf Classic, which teed off in 2003 and is held each year in June.  For many years, the Club hosted a tennis tournament, but the final game, set, and match was held in 2002.

Of course, at the heart of the Club are its programs.  With the sports and Camp Spencer programs thriving, new Executive Director Hank Utley asked Jim Helms to develop a program for the Club's teenagers in 1976.  Jim gave a famous reply, "If I can get a big screen TV and some telephones, the kids will come."  The Keystone Club, as it became known, grew into a program that is now 200 kids strong.  The Club branched out into sports other than football and basketball.  For many years, the Club sponsored a youth baseball team in the city parks and recreation league.  Donnie also conducted softball, indoor soccer, and lacrosse programs over the years.  When current Executive Director Valerie Melton took the helm in 1994, she began placing an emphasis on the Club's Afterschool and Summer Programs.  In terms of youth served and number of activity hours, those programs are now the Club's largest.

The Club's programs have produced many youth who have gone on to achieve their own fame.  Robert Earl Blue, Ishua Benjamin, and Dee Bost played basketball at the Club before they went on to play collegiate ball at UNC Charlotte, N.C. State, and Mississippi State, respectively.  Football players Jimmy Hitchcock and Jay Graham played at the Club before enjoying professional careers.  Legendary Concord High football coach E.Z. Smith used to be known around the Club for being so much bigger than the other boys his age.  The Club has had several Keystone members reach the finals of the Boys & Girls Clubs of America National Youth of the Year competition.  They include James Alexander and Barry Cannon (both in the 1970's) and Taylor Pruette, who won the nation's top award in 1985 and later became the Club's Board President in the early 2000s.  Claudine Chalfant and Beth Troutman were both Keystone Club members before they went on to star for Charlotte television news stations.  State Senator Fletcher Hartsell is a former Club member and Robin Hayes was a Club football and basketball coach before he became a U.S. Congressman.

The Hayes and Cannon families have always supported the Club, most recently through The Cannon Foundation and various family trusts.  Charles A. Cannon, the famous textile mogul, sponsored construction of the old building's "back gym" and once purchased a bus for the Club that affectionately became known as the "Blue Goose", which took many a trip to Camp Spencer and out-of-town athletic contests.  The Cannon Foundation was instrumental in funding the construction of the Club's current facility, which opened in December 2002, almost 53 years to the day that the original Concord Community Boys Club opened.

For over 70 years, the Club's objectives have stayed true to several basic principles.  As its mission statement reads today, the Club wishes "to enable all young people, especially those who need us most, to reach their full potential as productive, caring, responsible citizens."

What could be more important in today's society?